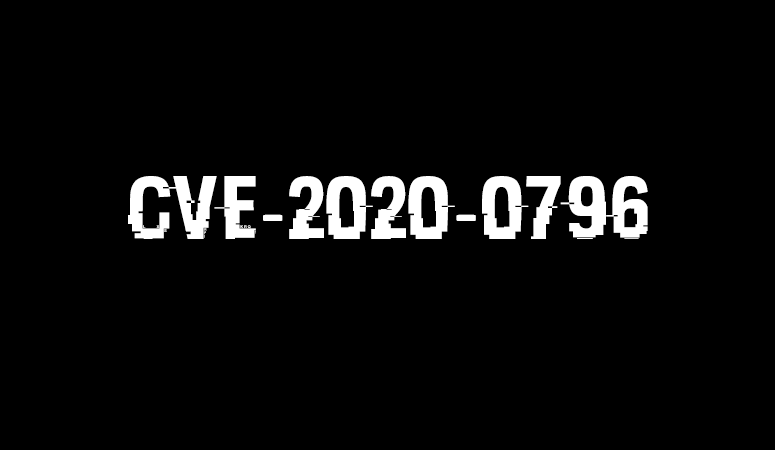 CVE-2020-0796 is a remote code execution vulnerability in SMBv3. An attacker could exploit this bug by sending a specially crafted package to the target SMBv3 server, which the victim needs to connect to. Users are encouraged to SMBv3 compression and block TCP port 445 on firewalls and client computers. The exploitation of this vulnerability opens systems up to a “wormable” attack, which means it would be easy to move from victim to victim.

I just want to share with you this article. In the evening on the 10th of March 2020, I saw in my twitter feed a message from MalwareHunterTeam about a “wormable” SMBv3 vulnerability. 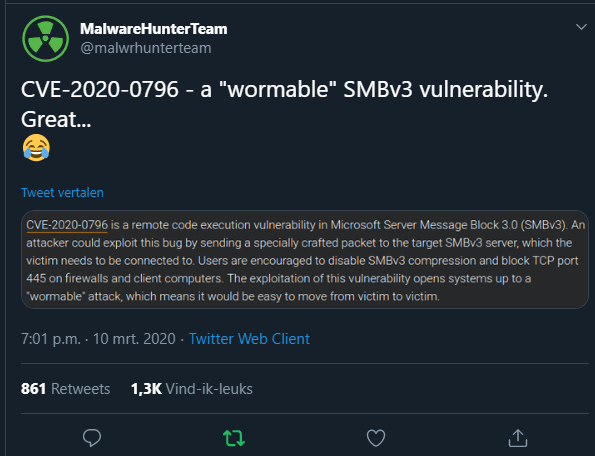 After this announcement, Microsoft has released a security advisory for a Remote Code Execution vulnerability that has been found in the SMBv3 (SMBv3.1.1) protocol. By sending a specially crafted package to the target SMBv3 server, an attacker can exploit this Buffer Overflow Vulnerability, from the context of an application to execute random code on the server. More technical details have been disclosed, we have only some information which has been shared by the security company’s Cisco and Fortinet. It seems that this vulnerability was leaked accidentally.

According to some reports, this is a “worm” that could easily move from victim to victim as we have seen before with WannaCry and NotPetya. Unlike WannaCry and NotPetya, CVE-2020-0796 is limited to SMBv3 and has no effect on Windows Server 2008 R2 and Windows 7 systems.

According to Microsoft, this vulnerability exists in a newly added feature to Windows 10 version 1903. Older versions of Windows do not support SMBv3.1.1 compression.

Microsoft has released a workaround for CVE-2020-0796. The workaround is to disable SMBv3 compression to block unauthenticated attackers from exploiting the vulnerability against an SMBv3 server. I have written a Powershell script that can be used for this workaround. I have published this script on Github: https://github.com/T13nn3s/CVE-2020-0976.

nikallass has placed a script on Github which can determine if the target has the vulnerable SMB version and whether compression is enabled or not by using Nmap. Repository on Github: https://gist.github.com/nikallass/40f3215e6294e94cde78ca60dbe07394.

dickens88 has released a Python script on Github which can determine if the target is been vulnerable for CVE-2020-0976. Repository on Github: https://github.com/dickens88/cve-2020-0796-scanner/.

On 12 March Microsoft has released out of band updates to fix the SMBv3 vulnerability. The update is available through the Windows Update or through direct download: https://www.catalog.update.microsoft.com/Search.aspx?q=KB4551762.

Overview Are you done with being followed by Google or Microsoft? Do you care about your privacy? If you can answer ‘Yes’ on both of these questions, this article might be interesting to you. In t...

How to add module in metasploit? I’m using Metasploit on my Linux Parrot OS machine and I was trying to exploit an OpenNetAdmin 18.1.1 with a remote execution exploit. But, my Metasploit does not ...