In a network environment in one of our customers, we are using a Network Intrusion Detection System (NIDS). After deploying Defender for Identity (formerly known as Azure ATP) on one of our Domain Controllers, the NIDS observed several failed RDP attempts to our machines in the network. In this article, I want to give you some information about why this behavior is expected.

After we have gotten the alert from the NIDS that one of our Domain Controllers is trying to establish a Remote Desktop Connection over port 3389 to several machines, in several subnets, I have started an investigation to found out what is going on. Because RDP attempts from a Domain Controller to several machines in the network, is something you might want to investigate. 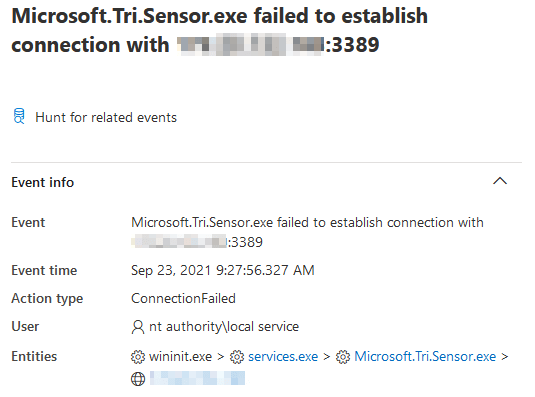 After checking the event information on the Domain Controler, it seems that Microsoft.Tri.Sensor.exe is responsible for this behavior. This Windows service is being used by Defender for Identity (formerly known as Azure ATP/ATA). After further analysis, I observe that this service is not only responsible for 3389/tcp connections to several machines, but also for a bunch of 135/tcp connections.

So, nothing to worry about!

It’s not advised to block these connections from the Domain Controller, because it will reduce the change of successful name resolution. Yes, you have a higher chance that any NIDS tool will detect this behavior and create a false positive alert. You can change your NIDS rule to only alert if there were several RDP connection attempts to several machines, but that’s up to you to decide.

I used this KQL query for the investigation, maybe it can be of good use to you.

For now, thanks for reading, and stay safe!

How to add module in metasploit? I’m using Metasploit on my Linux Parrot OS machine and I was trying to exploit an OpenNetAdmin 18.1.1 with a remote execution exploit. But, my Metasploit does not ...

Overview In this article, we gonna talk about auditing the quality of the passwords from a Microsoft Windows Domain Controller. As we all know, we need to use strong passwords. SysAdmins do have c...