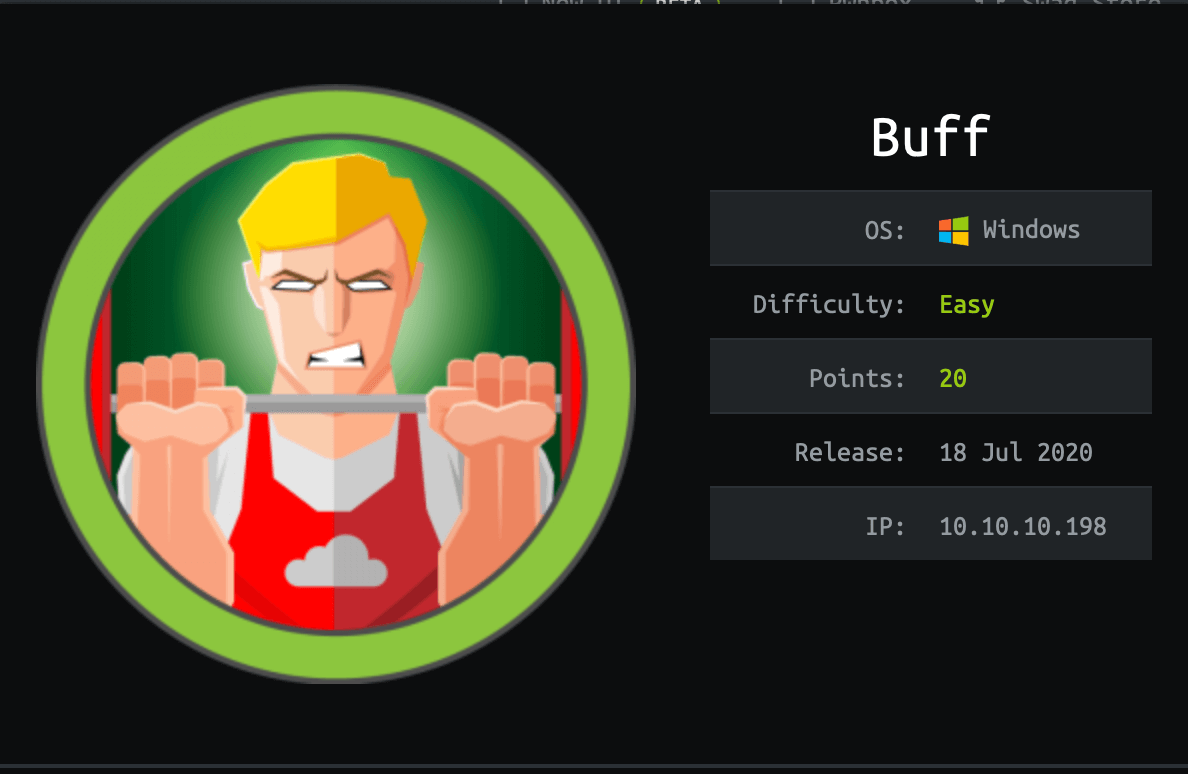 Notoriety wasn’t as good as fame, but was heaps better than obscurity.

In this post, I’m writing a write-up for the machine Buff from Hack The Box. Hack The Box is an online platform to train your ethical hacking skills and penetration testing skills

After the initial port scan with Nmap, we can discover one open port 8080/tcp. Behind this port, there is a web server running with the Gym Management Software version 1.0. This version suffers an unauthenticated Remote Code Execution (RCE) vulnerability.

After downloading and running the exploit, we were able to have a web shell on the machine and read the user flag.

In the enumeration, we can find the file CloudMe_1112.exe in the Downloads folder. Through searchsploit, we can find that this version suffers a Buffer Overflow (BOF) vulnerability. The application Cloudme is running locally on port 8888/tcp. To get this exploit working, we need to reverse tunneling this port to our attacker machine and then we can run the exploit to gain a reverse shell as the administrator to root this machine.

As always we start the box with a Nmap port scan.

The results of the port scan.

As we can see from the results there is only one open port 8080/tcp. We can see that there is running an Apache webserver behind this port with a website with the title mrb3n's Bro Hut. 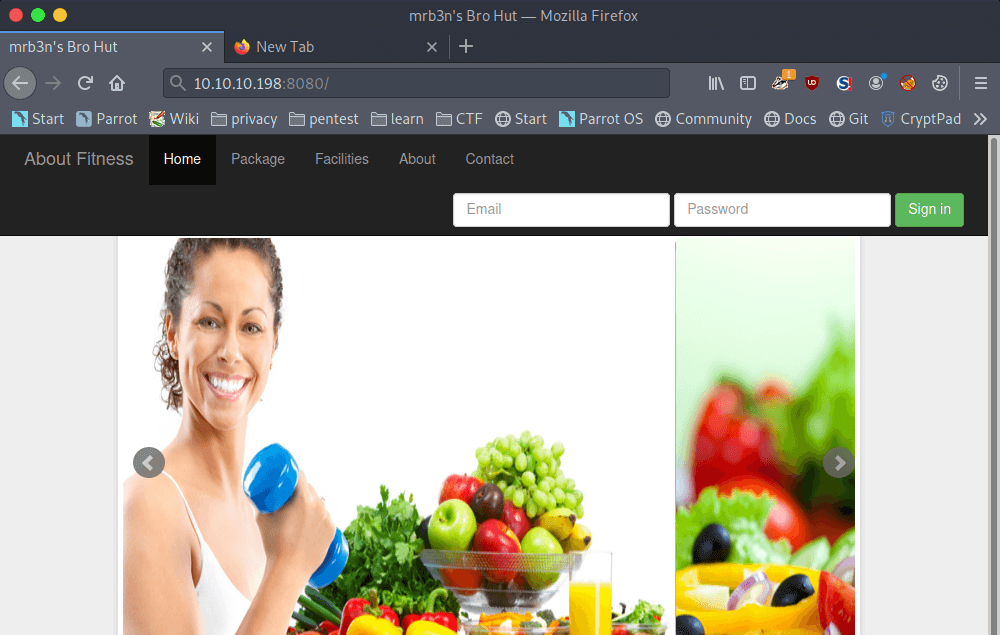 I copied the exploit 48506.py to my working directory and analyzed the code. Gym Management System version 1.0 suffers from an Unauthenticated File Upload Vulnerability allowing Remote Attackers to gain Remote Code Execution (RCE) on the Hosting Webserver via uploading a maliciously crafted PHP file that bypasses the image upload filters.

Let’s run the exploit to get a web shell. If you have problems with running this exploit because this exploit wants to run with Python3. I have solved this problem with the steps below. You can also upgrade the exploit to get support for Python 3. But that takes us too long, so we’re going to install pip for Python 2.7, so that we can install the missing Python 2.7 modules.

First, install pip for Python2. To install pip, we need to download the get-pip.py Python script.

Then we can use Python version 2.7 to call this script. This script detects that it is being run by Python 2.7, and it will then download and install the latest pip version for Python 2.7.

After pip for Python 2.7 is downloaded and installed, we can download and install the missing modules.

The missing modules are installed. We can now run the exploit.

After running the exploit, we have a web shell, and we can read the user flag. For me, this is the fastest foothold and user flag ever on Hack The Box. The next phase is to do a privilege escalation.

I have to exit this web shell so that I have more commands at my disposal. I downloaded the nc.exe to the box and created a reverse shell with PowerShell.

The reverse shell is established.

The machine Buff is a 64-bits Windows 10 Enterprise operating system.

After a time of searching, I found the file CloudMe_1112.exe in the ‘Downloads’ folder of the user Shaun.

We can see that the software CloudMe is installed because the processes are running on this machine.

If we check the connections on this machine, we see that this machine is listening on port 8888/tcp.

We can check searchploit for CloudMe version 1.1.12 and it seems that this version has a Buffer Overload (BOF) vulnerability.

I copied the exploit 48389.py to my working directory. After analyzing the payload, I can to the conclusion that we have to build a reverse tunnel. I downloaded Chisel 1.6.0, from GitHub: https://github.com/jpillora/chisel/releases/tag/v1.6.0. For my attacking machine, I’ve downloaded chisel_1.6.0_linux_amd64.gz and for the windows machine, I downloaded chisel_1.6.0_windows_amd64.gz. Download the chisel_1.1.0.exe on the machine and start local the chisel server.

We can start the chisel server on the attacker machine with a listener on port 5000.

After downloding chisel to the buff machine, we can forward port 8888 to our machine.

We can now create a reverse shell payload with msfvenom.

I can now place the payload in the exploit script. After the modification of the exploit, we got left with this script.

The only thing we have to do, is make sure that your netcat is listening on port 5555 and then run the payload.

Thanks for reading this write-up. This write-up and the machine Buff, can be used for your preperation for the OCSP exam. I hope in the future to write a blog post about OCSP and how you can prepare for the OCSP. But first, I have to do the OCSP by myself 🙂

If you like this write-up, please consider spending a respect point, my HTB profile: https://app.hackthebox.eu/profile/224856.