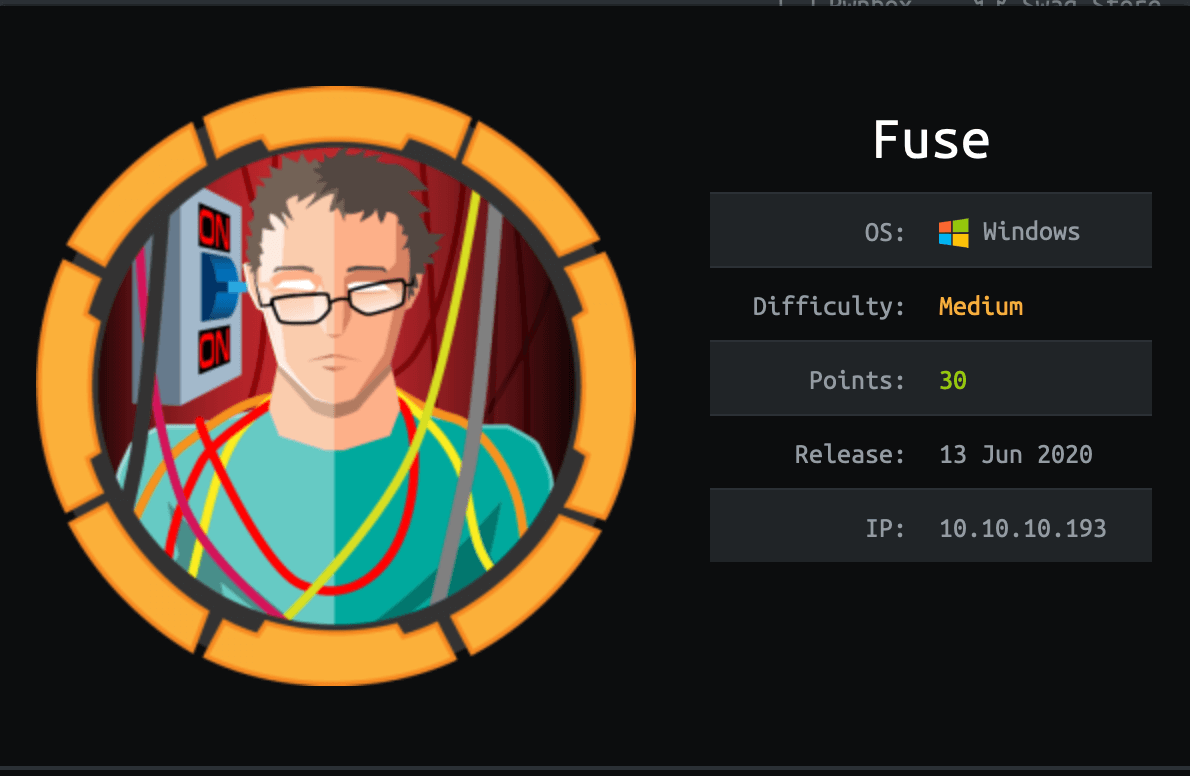 In this post, I’m writing a write-up for the machine Fuse from Hack The Box. Hack The Box is an online platform to train your ethical hacking skills and penetration testing skills

After the initial port scan, I found a web service running on this box. I have checked this service and I landed on the free Print Logger service from PaperCut. Through the Print Logs, I have created a wordlist with usernames. With CeWL I have created a wordlist of potential passwords. With the use of Metasploit, I was able the brute-force the passwords and found 3 valid passwords for the users bnielson, tlavel, and bhult.

The root part was the most difficult part of this box. The user account has SeLoadDriverPrivilege privilege. With this privilege, the account is able to load a brand new printer driver. From the website tralogic.com I found an explanation of how to abuse this privilege to gain privilege escalation to SYSTEM. First, I have compiled a C++ program to .exe-file to load a malicious driver into the system. From GitHub I downloaded an exploit to launch a reverse shell from the SYSTEM space to my attacker machine.

As always I start the box with a port scan.

The results of the port scan showing that I’m dealing with a Windows Server 2016 Standard. According to the open ports, I assume that this server is the Domain Controller in the forest fabricorp.local. The oddity of the open ports is that this Domain Controller is also running a web service on the HTTP port 80/tcp. But, let’s not get confused and start the enumerating this box.

Before I can visit the web service I have to add the IP-address 10.10.10.193 tot my hosts file and points it to the hostname fuse.fabricorp.local, otherwise I will receive a Webpage could not be loaded error message. After I have modified the host’s file I have visited the webpage http://fuse.fabricorp.local. I landed on the Print Logs page of the FollowMe printing solution of PaperCut.

According to the Copyright (1999 - 2012), I assume that this box is running an outdated software of PaperCut. From the ‘Print Logs’ page, there are some printer jobs from three different dates visible. The logs revealing four different usernames. I have noted them down in the usernames.txt file.

I created a wordlist with CeWL. Important to note is, that CeWL is not defaulting adding numbers to the wordlist. I know it sounds ridiculous, but you need to add the parameter -include-numbers, otherwise, you will not be able to brute-force the password.

I have invoked this command below for the creation of the wordlist.

I have used the auxiliary/scanner/smb/smb_login module in Metasploit to brute-force the password.

After brute-forcing the passwords, I have found 3 working credentials. It seems that those accounts are using the same password.

I have got now 3 valid user accounts with credentials, I have now entered the Intrusion phase in the Kill Chain.

It seems that the password needs to be changed. Through the tool smbpasswd I’m able to change the password from a user account on a remote computer. I have changed the password to [email protected].

With the new password, I was able to log in through the rpcclient. Now, I can start to do some further research on the user accounts, user groups and the installed printers. Let’s first check the user accounts.

I have now a complete list of all of the user accounts. The second step is to enumerate the Groups.

Through querygroupmem I found that the group IT_Accounts is a non-default group, when I check the members I see that the user account svc-print (rid: 0x450) and sthompson (rid:0x641) are members of this group.

So, I have now the users and groups. The interesting what I’ve learned here that I have to focus on the accounts svc-print and/or the user account sthompson, because they are member of the IT_Accounts Security Group.

The second part of the enumeration through RPC is to check the installed printers. I have invoked this command below and I found a password! Every SysAdmin knows that you do not write down passwords in plaintext.

Through this account I was able to read the user flag. I can now start the last part of this box ‘Privilege Escalation’.

The Privilege Escalation for Fuse was a tough one for me. I have to admit, that I’ve asked some help with this part from the Hack The Box community. In the end, it turns out that the box was not always stable to get the exploit working and that when I was trying to go too fast, that I will miss crucial information. However, let’s check how I’ve done and if you have any improvements, let me know!

To compile the exploit, I have used Visual Studio Community 2019, version 16.3.7. I have created a new C++ project with the name EoPLoadDriver. After the creation of this project, I have added a file by right mouse clicking on Source Files -> Add -> Existing Item and then I selected the downloaded eoploaddriver.cpp from this Github repository.

I have removed the precompiled header #include "stdafx.h" from line 6. I have compiled the program to an exe-file and uploaded it to the box. I have also downloaded the CapCom.sys and uploaded this file to the box. You can find the download link below:

I have now uploaded the EoPLoadDriver.exe and the CapCom.sys to the box. With these two files, I can load the malicious driver. To get SYSTEM access, I need to have a reverse shell that can be executed by the exploit. Through msfvenom I’ve created the reverse shell payload.

I have also uploaded the shell.exe to the machine and then I’ve prepared Metasploit to get the reverse shell.

I have to compile another project the ExploitCapcom from Github. With that exploit, I can perform token stealing to get the SYSTEM privileges. I have opened this project in my Visual Studio 2019 Community Edition. In order to get this exploit to work, I have to make some minor modifications.

First, I have to upgrade this project to version v142. This done automatically by Visual Studio on the opening of the project. I have modified the CommandLine execution to the reverse shell payload.

After the modification, I’ve compiled this program to the ExploitCapcom.exe and then I’ve uploaded this exploit to the box. In the end, I’ve got these files on the box:

Now I can start. First I load the driver.

The Capcom.sys driver is loaded, it’s time to start the exploit.

Got a reverse shell! Now I can take the root flag.

What did you think of this write-up? Did you enjoy it? Yeah? Consider giving me a respect point, my HTB profile: https://www.hackthebox.eu/home/users/profile/224856.