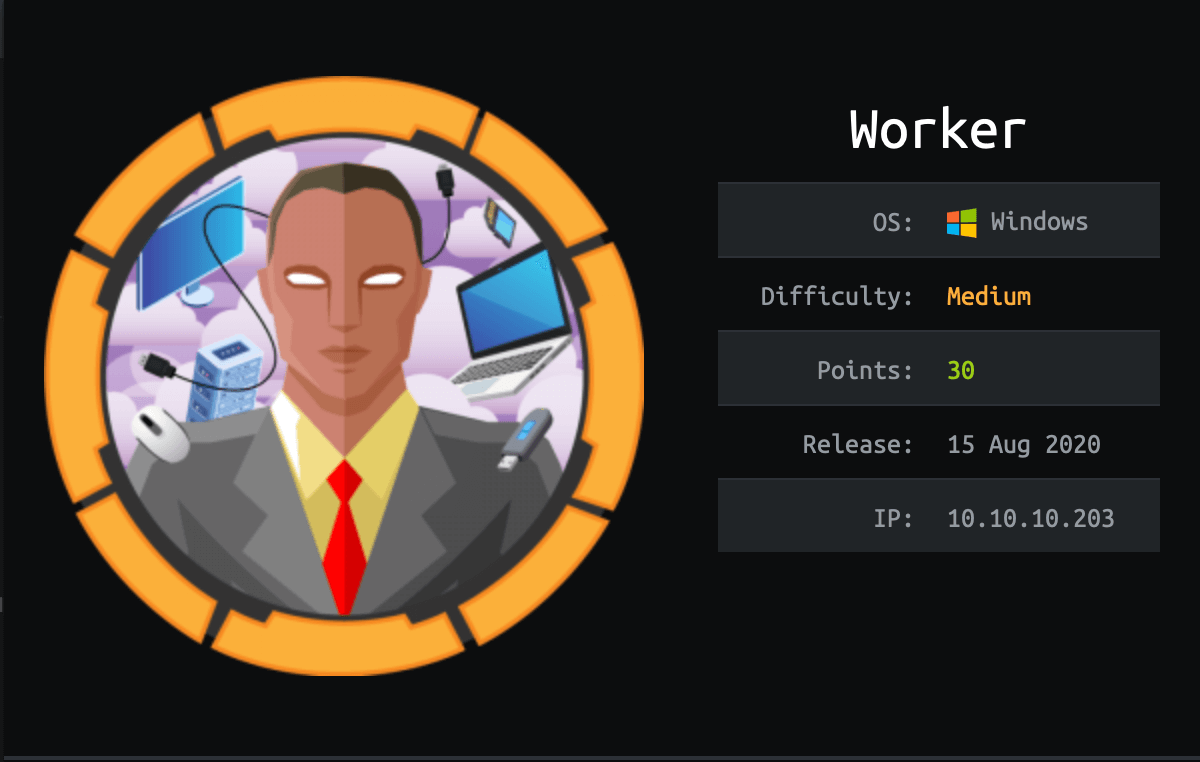 Concentrate all your thoughts upon the work in hand. The sun’s rays do not burn until brought to a focus

In this post, I’m writing a write-up for the machine Worker from Hack The Box. Hack The Box is an online platform to train your ethical hacking skills and penetration testing skills

After the initial port scan with Nmap, I found two open ports. The first port was HTTP 80/tcp and the other one 3690/tcp. The last port was a new port for me, I didn’t recognize the service. After some searching on the web, I found this SVN service and connected to this service. Through the commits, I could find the credentials for the foothold in the file deploy.ps1.

With these credentials, I was able to authenticate against the web service, running in the HTTP-port, and landed on the Azure DevOps Server installation. Through upload a shell.aspx for a webshell, I could establish a reverse shell to my machine. It has taken a while before I found out that there is an additional drive attached to this machine with the Azure repository files. In one of the files, I found a list of credentials. I matched this list with the listed user accounts in the C:\Users folder and could establish a WinRM session to grab the user flag.

In the end, the root part was very easy. Because I’m not a programmer I had need one nudge to fully understand what I have to do. I have created an automated pipeline and added a malicious script in the pipeline which could change the Administrator password. After running the pipeline, I was able to establish a WinRM connection to grab the root flag.

As always I start the reconnaissance phase with an Nmap port scan.

The results of the port scan.

According to the results of the port scan, I’m dealing with a web server, because the HTTP port 80/tcp is open and Microsoft IIS version 10.0 is running. A potential risk is found on this server as the sysadmin has left the TRACE method in the open. It is one of the most common vulnerabilities found on webservers these days. It is usually used for troubleshooting and should be turned off. Only turn it on when it is needed for diagnostics.

I visited the webpage on the URL http://10.10.10.203 and landed on the default webpage of ISS, with the title IIS Windows Server. 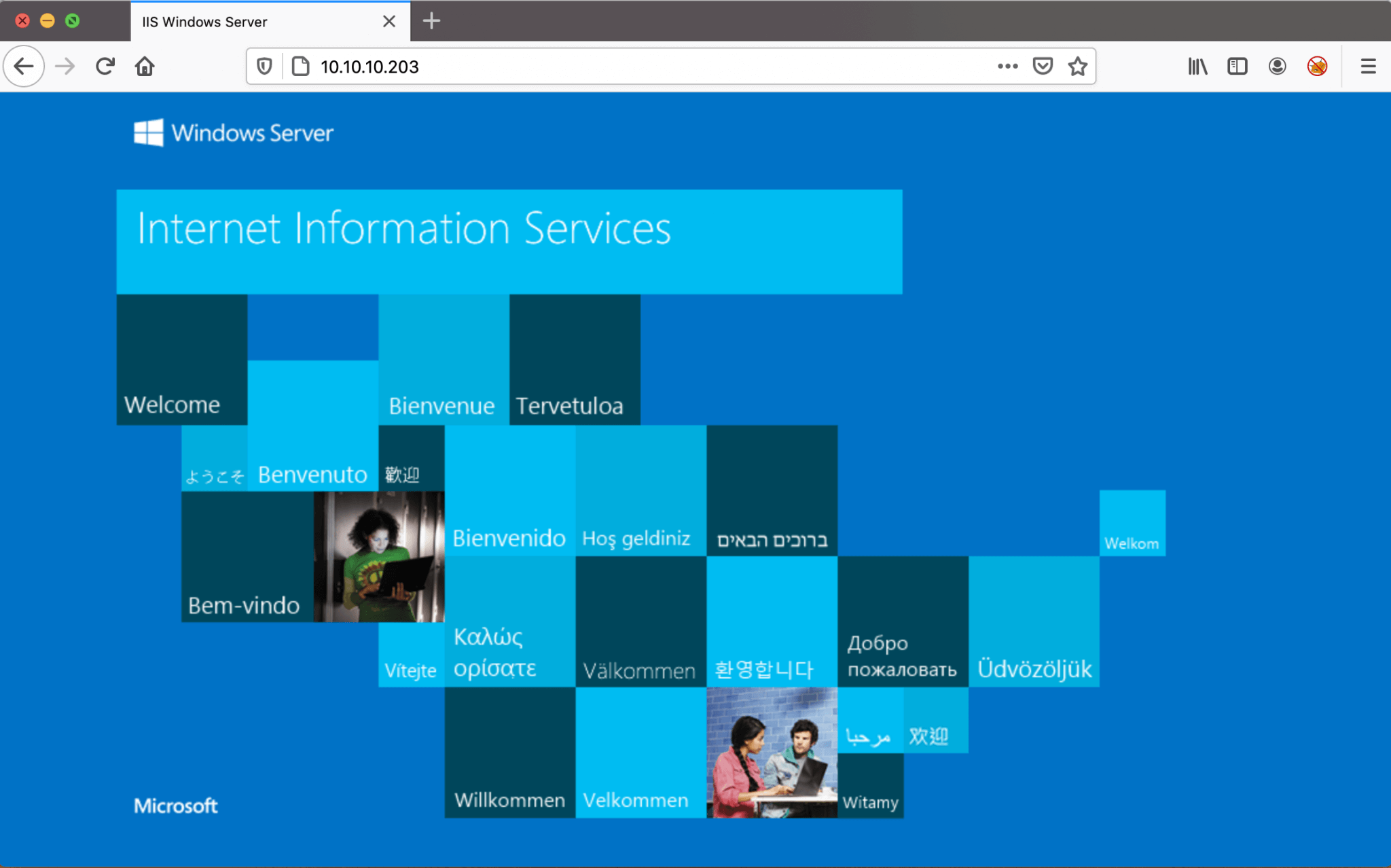 I have tried some directory fuzzing with wfuzz, but it’s a no go. Let’s jump to the SVN-protocol.

Before I can start using the SVN command-line tools, I have to install the Command Line Tools package in order to use these commands. I’m running on a MacBook Pro and since the installation of Catalina 10.15 the “Command line tool support for Subversion — including svn, git-svn, and related commands — is no longer provided by Xcode”, according to the macOS Catalina 10.15 Release Notes.

After support for Subversion is installed. I need to know what this is. After some Googling, I found that this a program to manage and track changes in code and projects. It’s a version control system like Git. With this knowledge, I can proceed.

I need to find a working project. I have done a quick search on DuckDuckGo and found this website: https://www.perforce.com/blog/vcs/svn-commands-cheat-sheet. This website contains the Basic SVN Commands.

I have to install SVN support, with these commands.

I found one directory with the name dimension.worker.htb and the file moved.txt. The second step is to checkout this repository to download all of the contents to my machine.

Let’s first read the contents of the file moved.txt. 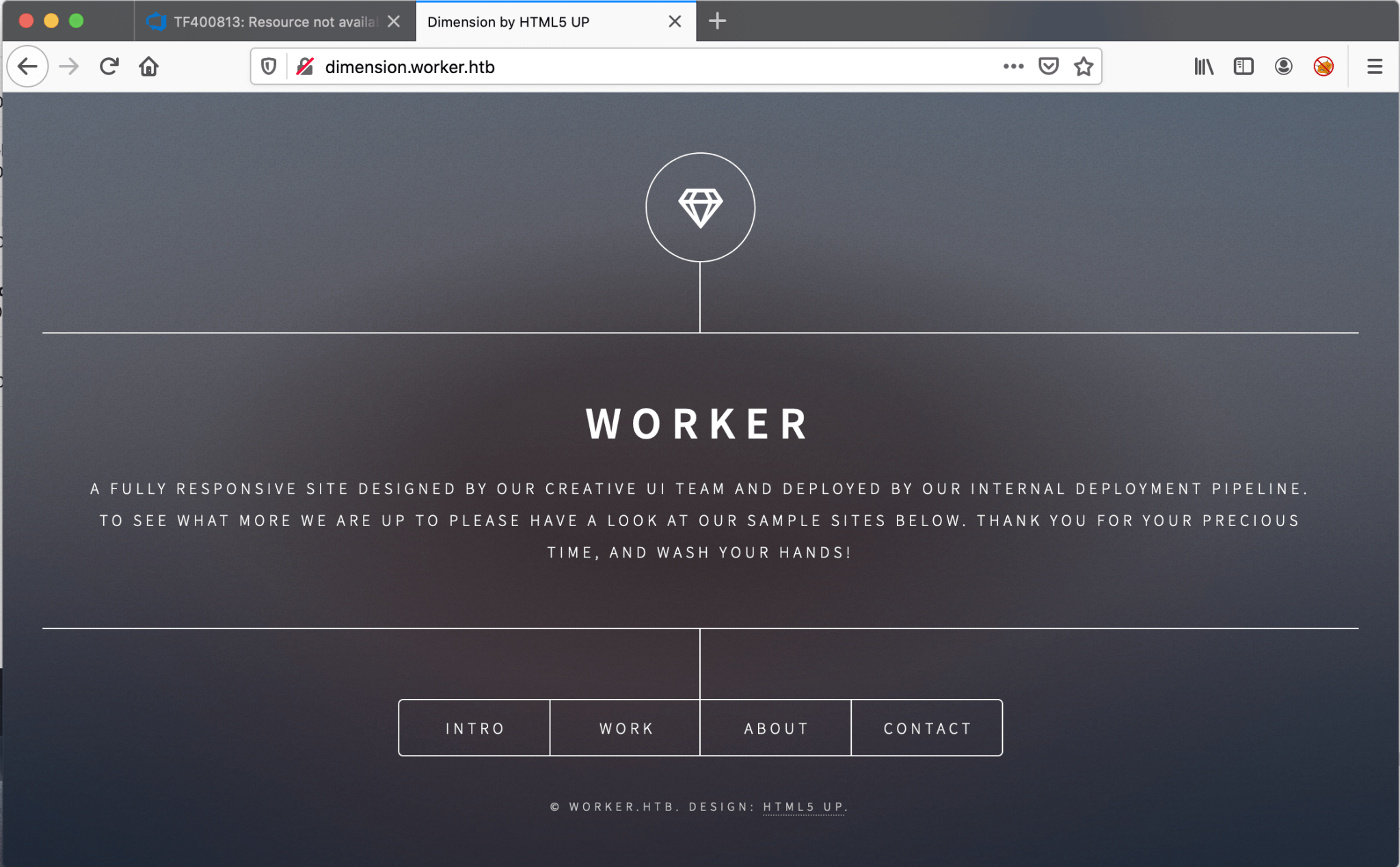 This website got a bunch of redirects to other subdomains. I’ve added the all one by one to my /etc/hosts file:

I have checked the contents of this website, but no fancy data.

With the command svn info. I can get information about a repository.

I got the user Nathan, this can be a possible username. Let’s try to find more information about this repo, maybe in the log.

I know definitely that Nathan is our guy, I need to find his password. This repository got’s multiple versions, let’s try to revert to another version. In version r2 a deployment script was added. In the current version r5 this script is gone. With the svn merge -r [current_version:[previous_version] [repository_url], I can revert to this particular version.

I got now the credentials of the user Nathen, let’s try to log in on http://devops.worker.htb. After the successful login I got redirected to Azure DevOps with the project SmartHotel360 on the screen. This is the only project in the ekenas repository. 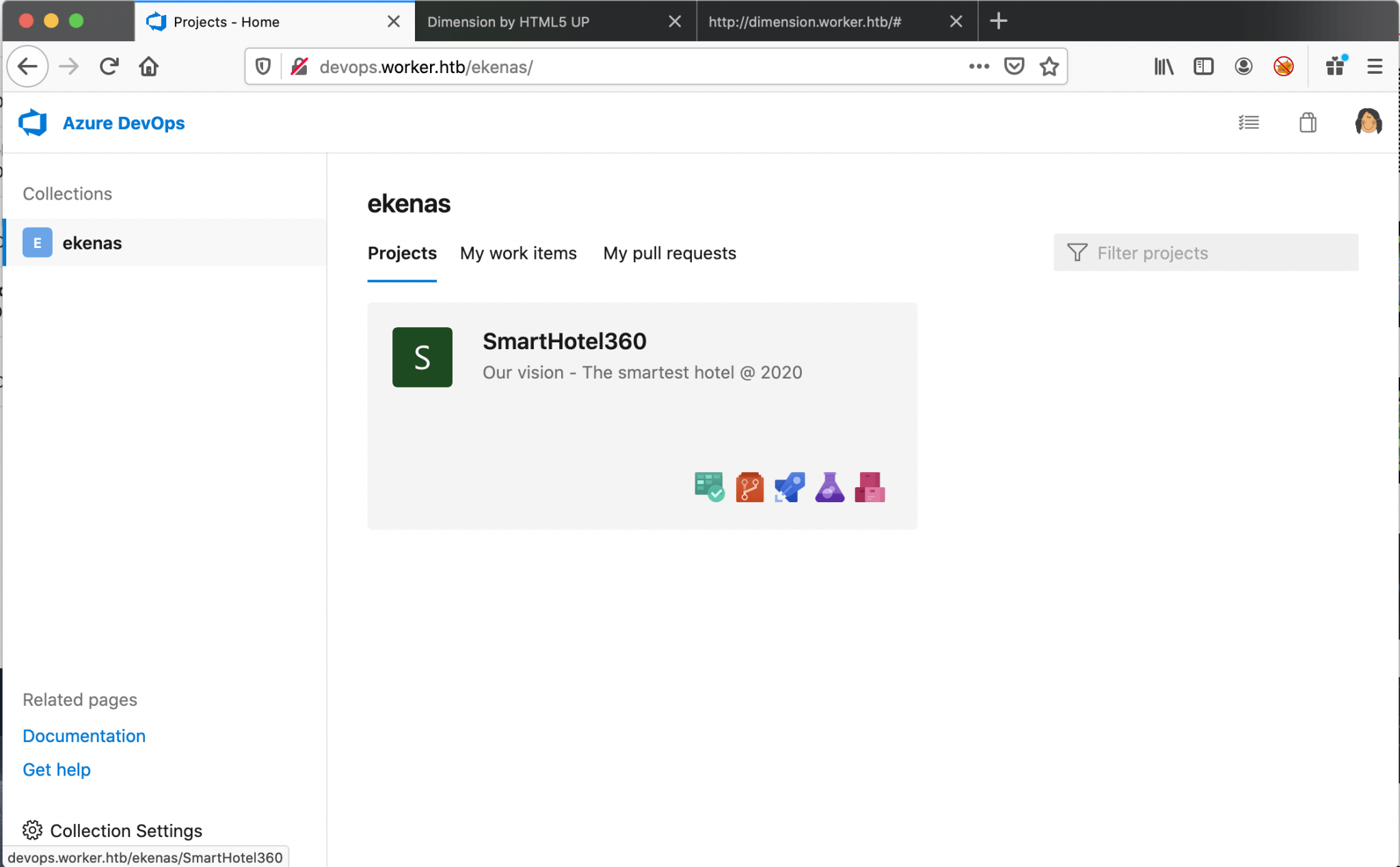 As this is the only project, I need to focus on this one and start the enumeration of this project. This project has one Branch, which is the master branch. I have checked the files in this branch and it has multiple repositories. According to the default chosen repository name and the file index.html, this is the project for the website spectral.worker.htb.

I do not have permission to add directly a file to the master branch, I receive the error message: ‘TF402455: Pushes to this branch are not permitted; you must use a pull request to update this branch.’

I have to create a new Branch, I give this branch the name T13nn3s.

I’ve added a feature request as a Work Item with the name revshell. You get it? I ask for a reverse shell feature? My bad, I have strange humor. Well go on T13nn3s, you need to hack this box. 🙂

I found on the GitHub page from tennec, a lovely ASP.NET webshell.

I uploaded this webshell to the T13nn3s branch and linked this upload to my “feature” request. Linking this file to a work item is mandatory to get the merge from my branch into the master branch. 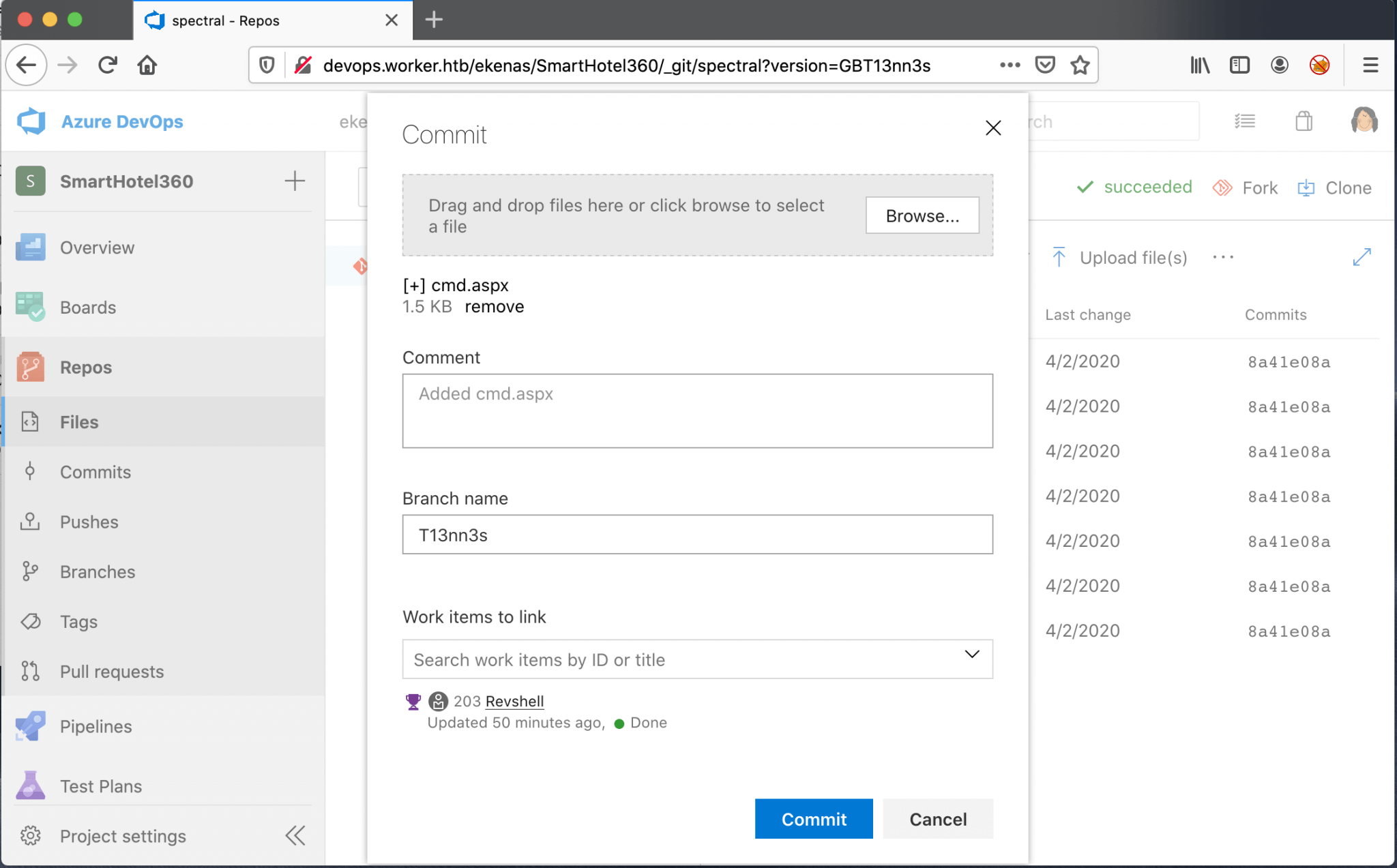 After the pull request, the file cmd.aspx is listed in the master branch. 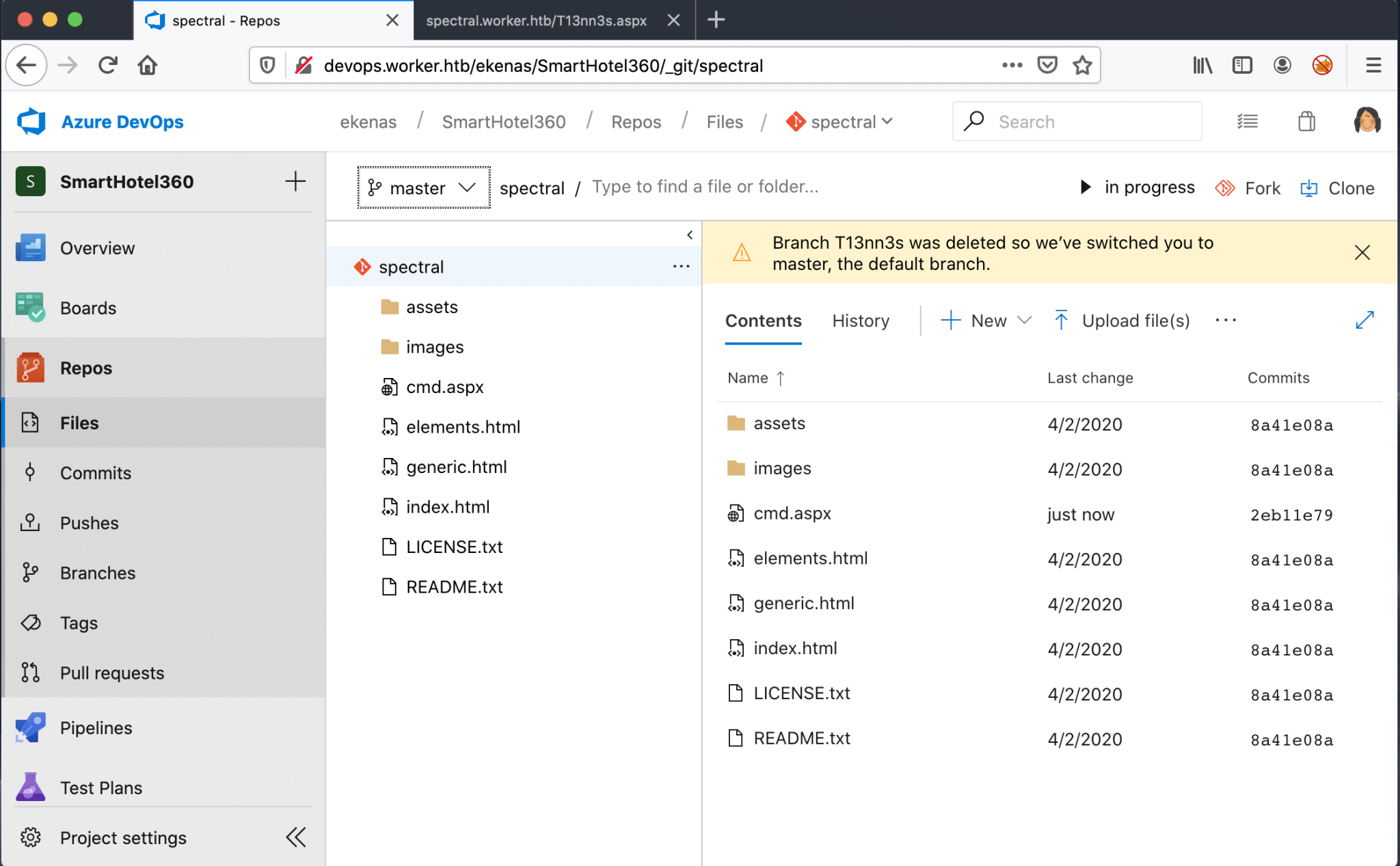 I should now have access to this webshell from the web browser. I’ve visited this URL http://spectral.worker.htb/cmd.aspx, and I got a webshell.

The next step is to get a reverse shell. I used Powercat, from Bessimorhino’s Github repo: https://github.com/besimorhino/powercat. I have downloaded the file powercat.ps1 through the webshell to the box and directly launched the reverse shell.

After clicking on Run, the reverse shell established.

I immediately switched to PowerShell and started to enumerate this box. I found that 2 user accounts are listed on this machine.

I poked some around and found the inetpub. page from IIS, with the default website. I have searched further, but I could not find the DevOps page. Also, the SVN directory could not be found. It’s the first time for me, that I’ve seen this on Hack The Box… I checked if there are any other drives listed on this box and it appears that there is a W:\ driver present.

I changed the directory and there are the files I’m looking for.

From the list of files, I found the file passwd with a list of usernames and passwords.

I already know that there is a username robisl listed on this box. I decide to use the username and password combination robisl:wolves11.

With Evil-WinRM I created a session on this box and grabbed the user flag.

Let’s check what kind of user I’m and which privileges this user account has.

He’s a member of the production group, let’s jump back to https://devops.worker.htb and sign-in with his credentials. After signing in there is one project visible with the name PartsUnlimited.

I’m not a programmer, so it has taken me some time and a nudge to found out what I have to do next. It seems that I have to create a pipeline and do something with a script. After enumerating harder and do stuff with the pipeline, I came on this path to root this machine.

I have started an automated build, by going to Pipelines and then to Builds and clicking on New Pipeline. 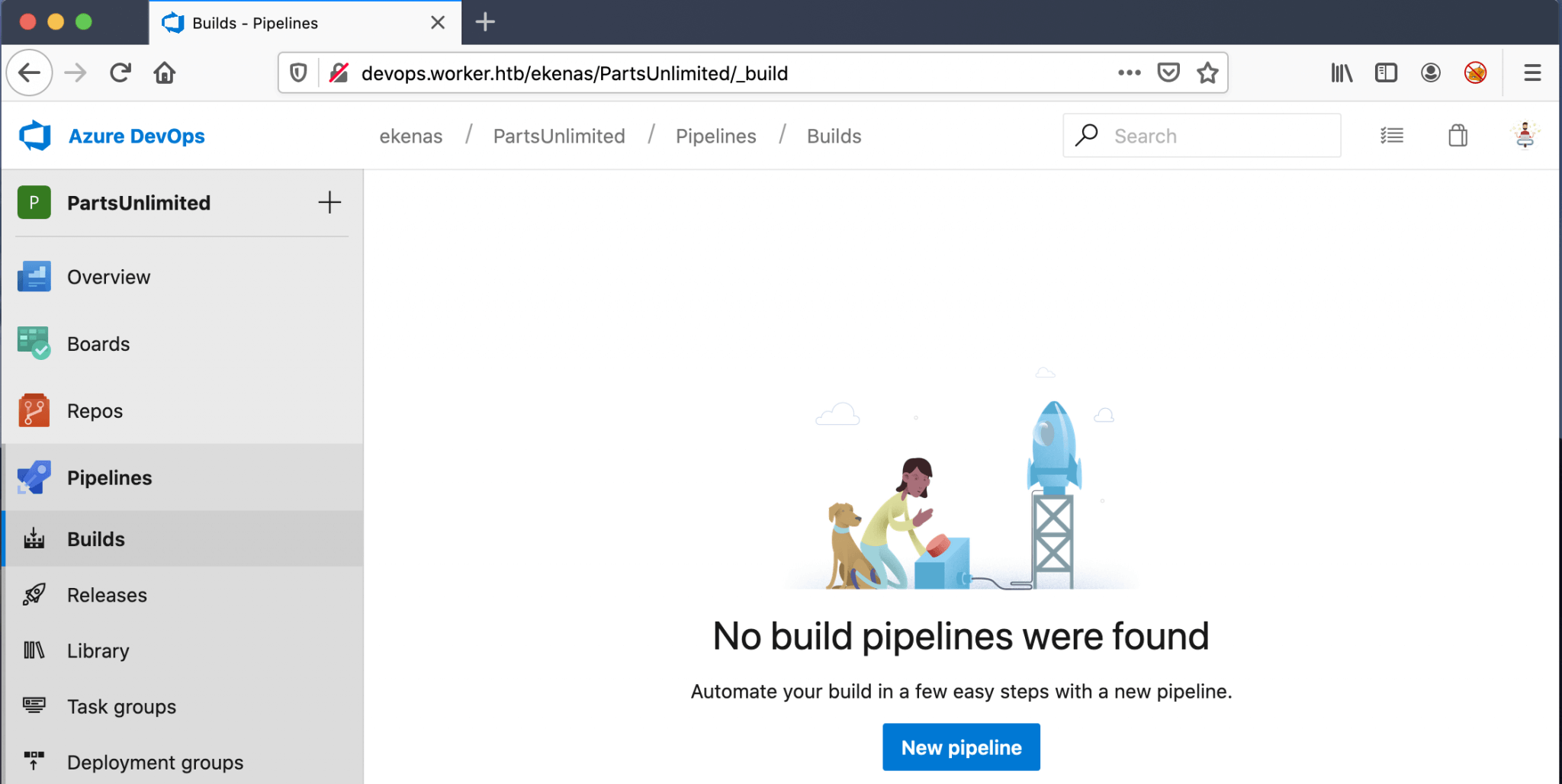 As this box is using the Azure Devops Server installation, I have chosen in the next screen for Azure Repos Git. 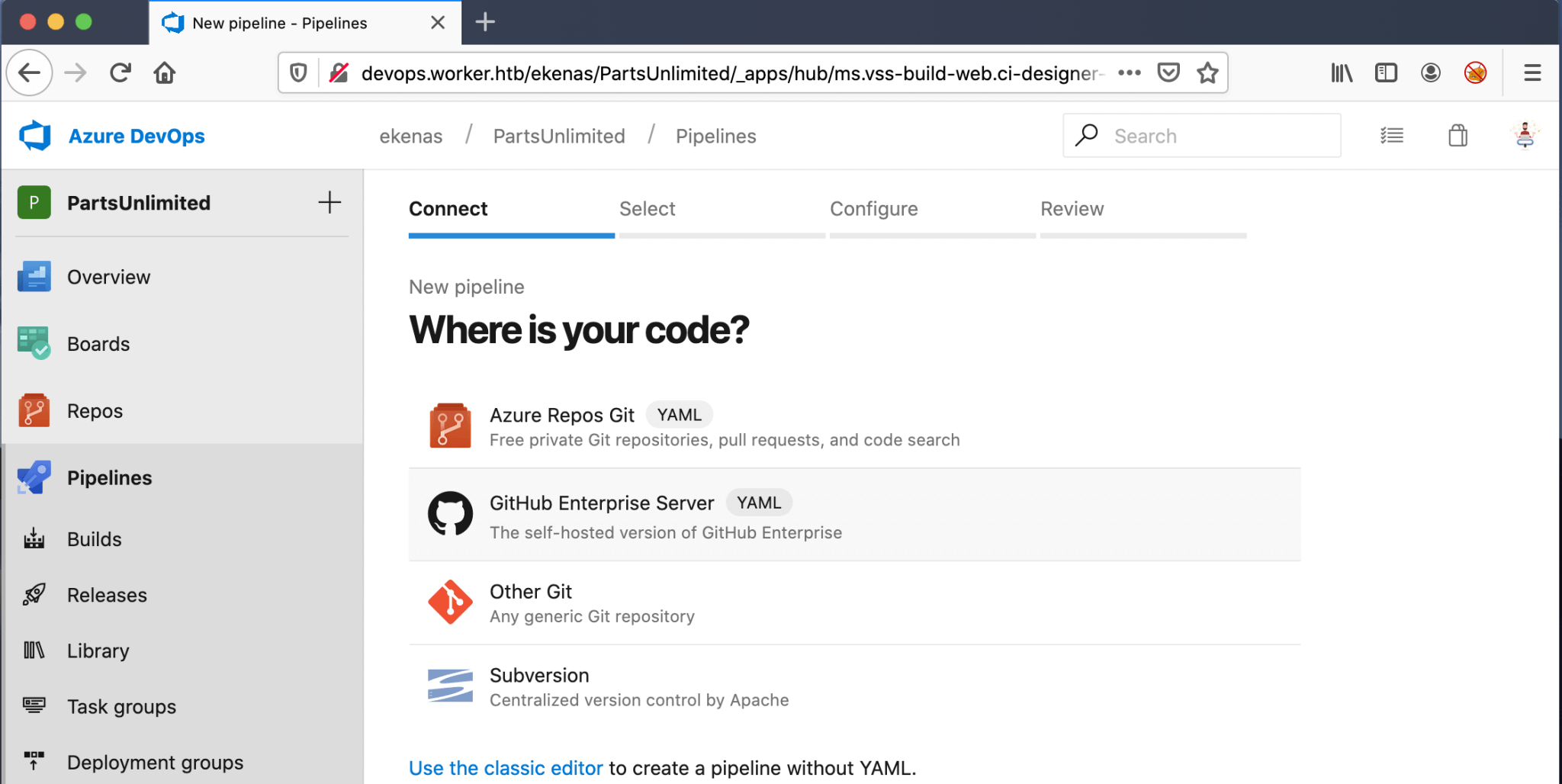 After I have selected the PartsUnlimited repository, I have chosen for the Starter Pipeline. This option allows me to start with a minimal build and deploy my code with a malicious payload. 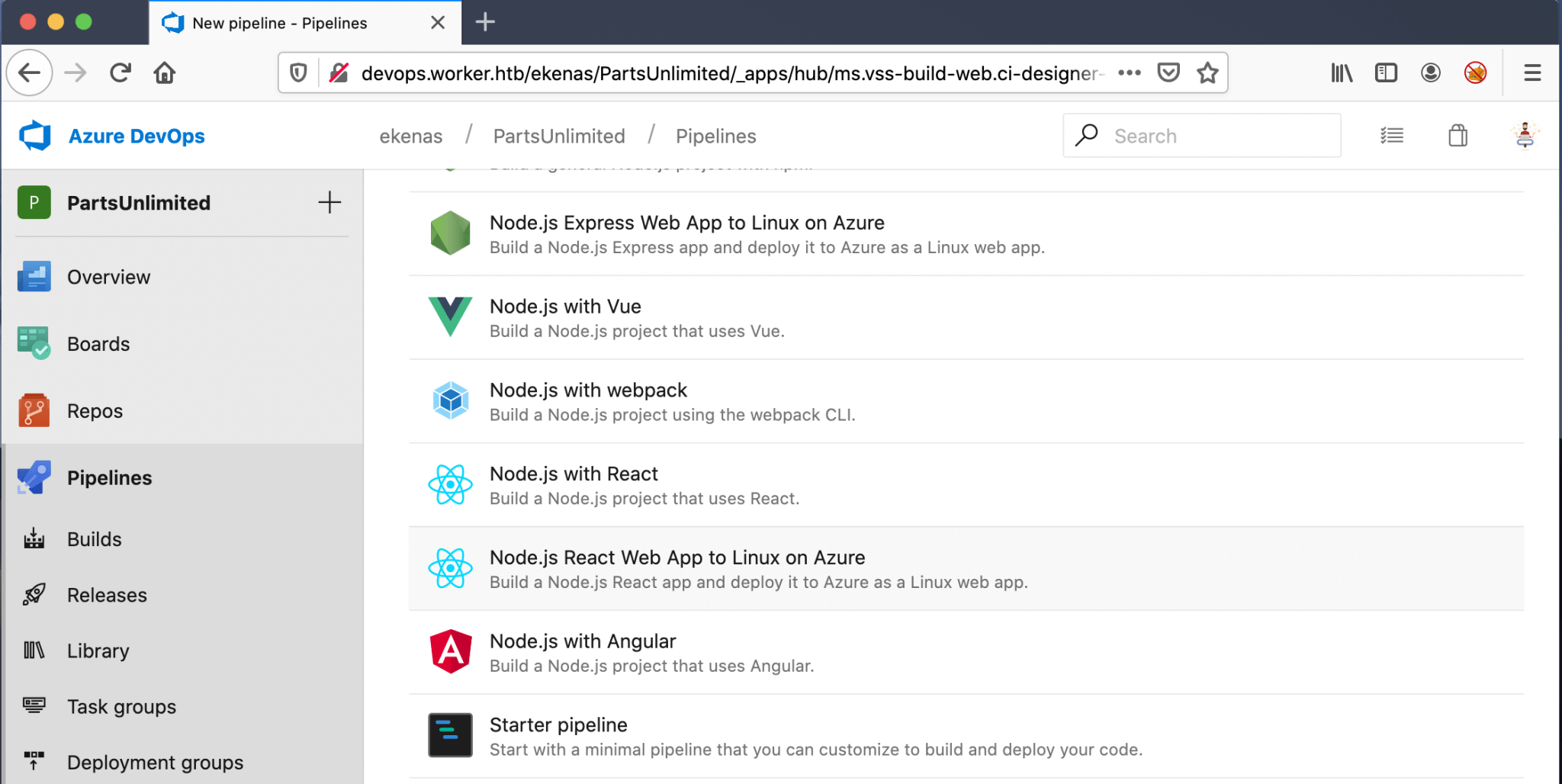 I used as the malicious payload this script:

This script is doing an easy thing; change the password of the Administrator-account. 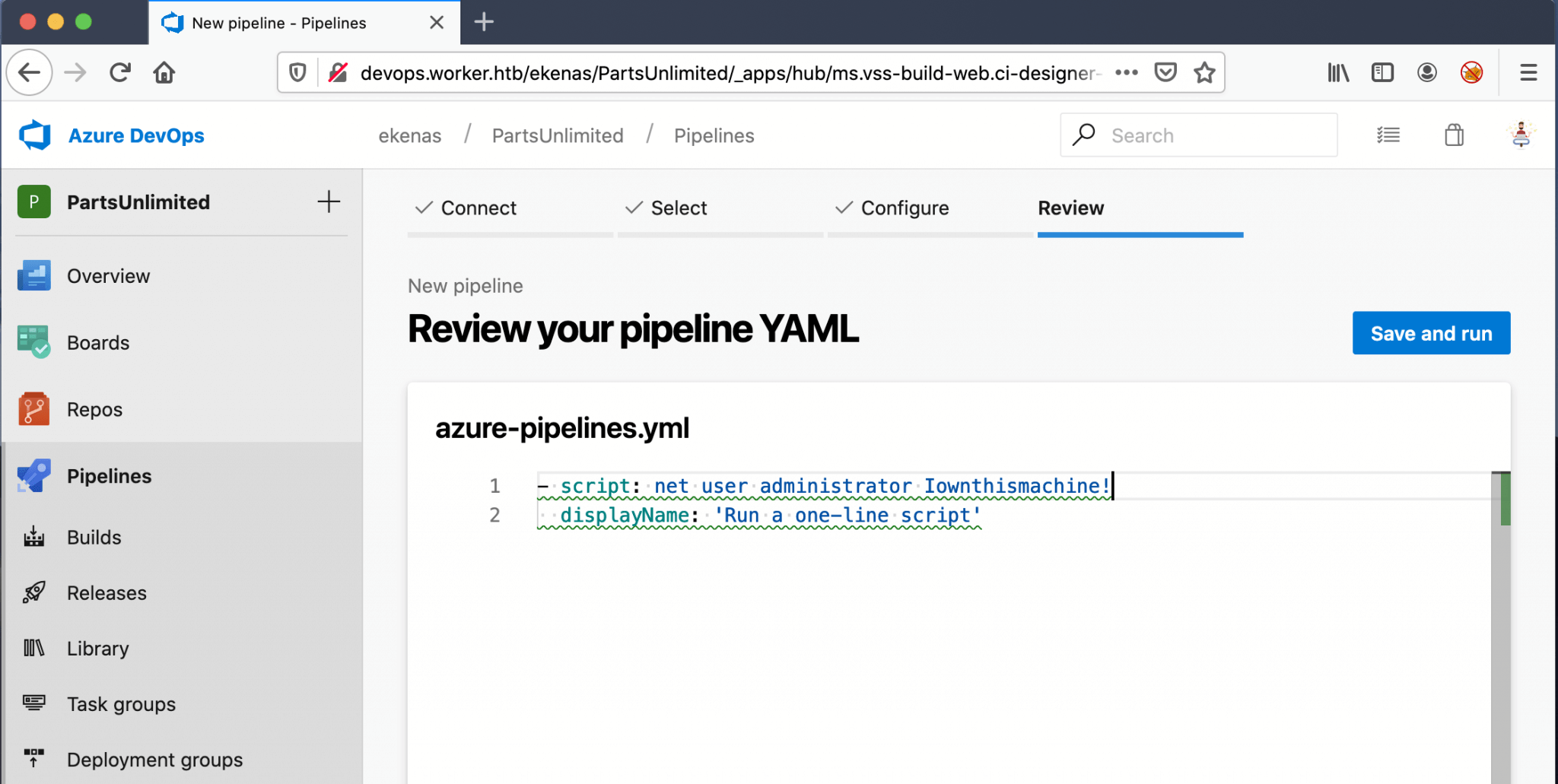 The next step is clicking on Save and run, to run this pipeline. 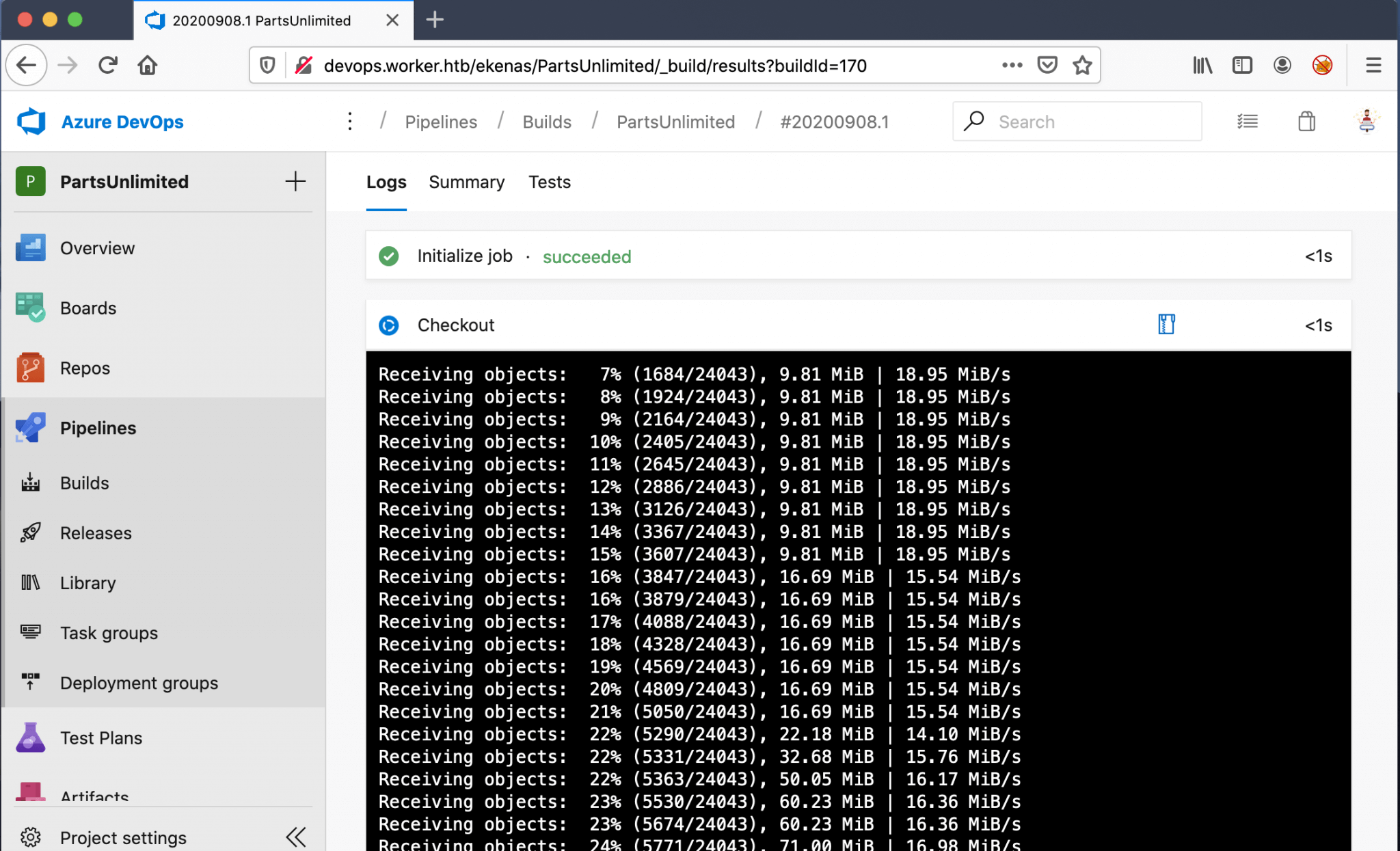 After finishing this job, I assume that my script has being executed. Because, all the output was going so fast over my screen, I could barely read it. I used Evil-WinRm to establish the connection. And boom! I’m in as Administrator.

Last thing is to grab the root flag and this box is owned.