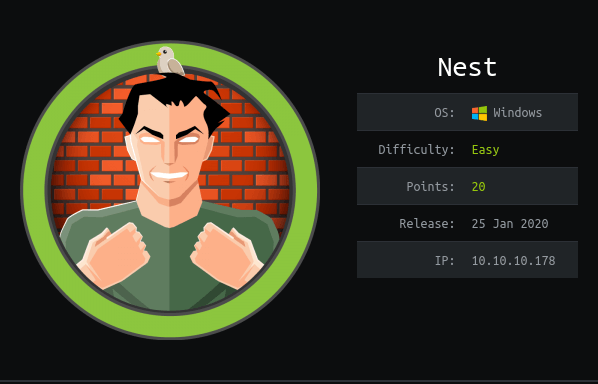 Look up at the stars and not down at your feet

In this post, I’m writing a write-up for the machine Nest from Hack The Box. Hack The Box is an online platform to train your ethical hacking skills and penetration testing skills

This box shows the concepts of enumeration. This box relies heavily on enumeration and basic knowledge of VB.NET scripting language. It is a CTF-like box and one big puzzle that you have to put back together after each step to be able to go to the next step. I really enjoyed this box, even though I was misled a few times by the files I found and misinterpreted. This box is one of the nicest boxes I did at Hack The Box, I have really enjoyed it.

The Nmap port scan reveals to open ports, the 445/tcp for SMB and 4386/tcp. The last port is for an unknown service, I found that the HQK Reporting Service V1.2 is running in this port. It reachable through Telnet. I found some files but I was not able to open it. The DEBUG command needs a password, which I do not have (yet). Through the enumeration of SMB with Guest, I found the credentials for the TempUser in an alternative data stream from a TXT-file. I have now gained the foothold on this machine.

Because the user TempUser has more permission to access files and I found with this user a Visual Basic Script which needs to be decompiled. After decompiling, the code reveals that it hold a decrypted string. After doing some modification to this file for decryption of the string I found the password for the user account c.smith.

The user c.smith holds interesting information on his home drive for HQK Reporting Service V1.2. With Powershell, I revealed an alternative data stream from the file Debug Mode Password.txt. This stream contains the DEBUG password for the HQK service. Through the DEBUG console, I discovered the HqkLdap.exe file. After decompiling this program with DotPeek. This program holds an encrypted password. After adding an oneliner to this script which I calling the decryption function, I get the Administrator password. With this password, I was able to get the root flag through making an SMB connection with the Administrator-account.

As always first the portscan with Nmap. I have added the -p- parameter to the scan, otherwise, the high port will not be detected.

The results of the portscan.

After the portscan I get the result that there are two open ports:

The port 4386 is an unknown port and not default bound to a program or service. Nmap returns some useful information: It shows that I can run some commands.

have started by trying to search through the web browser http://10.10.10.178:4386, the website keeps loading fo a little time, but I’m patient, and the webserver is returning the following:

The service is expecting a command. I first tried to create a session with netcat to the server. A shell comes up, but cannot use any of the commands. Then I tried with Telnet.

Now I’m getting somewhere. The LIST command shows that I’m currently in the hqk directory. With the SETDIR commando’s I can change the directory. With SETDIR ../ I can go a level up, and I’ve searched through all of the directories and some useful files but I can’t open any of the files. The HELP command shows that I can use a DEBUG command, but this command needs a password.

Let’s poke some around. After running around on the server I found some interesting directories in C:\Shared but again, none of the files can’t be opened or being downloaded. Let’s try the lower port for further enumeration.

I don’t have any user credentials yet. Sometimes it is possible to gain access as an anonymous user. For this step I use smbmap. I invoked this command below:

With the command smbclient //10.10.10.178/Data I got a bite. I have access to the Shared folder. The file Welcome Email.txt in location \Shared\Templates\HR contains interesting information. I downloaded this file, with the use of the mget command, to my machine and read the contents of this file.

Cool! Now I got some credentials! The file says that we can make a network connection to a share.

I created an SMB connection with this command below.

There is a file New Text Document.txt. When I open this file… I find this file is empty. All that work for an empty file?! Although, maybe this file isn’t as empty as it seems. I want to get all the information from this file. I’ll do this with the allinfo.

Yep, this file is as empty as it is. There’s also no alternative data stream in it. I’ve got the user credentials TempUser:welcome2019. I created a connection with this user.

I downloaded all the files from the \IT\Configs directory. The other folders are empty. I investigated the files. In the file RU_config.xml I found an encrypted password of the user c.smith.

I placed the password in the hash.txt file and decoded it as base64 and try to run john against it. The decrypted password seems to be a complex password, but, this password isn’t working on SMB. Then I looked into the config.xml file, and this part of the script is very interesting:

I have no access to the location //10.10.10.178/Secure$ with smbclient, it leaves me with an error denied message. It took me some hours to find out the next step. I found out that I can browse in this location, the cd command isn’t prohibited. I invoked this command:

I walked through all the files and directories and downloaded the files to my machine for further investigation. Compile Visual Basic Project (Visual Studio)

I put all the files together and it seems that I have downloaded a Visual Basic project with the name RU Scanner. The project file I placed in C:\%path%\VB Projects\WIP\RU\RUScanner.sln. From this moment I switched to my Windows machine. On this machine, I’ve got Visual Studio 16.4.3 already installed. I opened the file RUScanner.sln.

Let’s start from the beginning. I build this project by right-clicking in RU Scanner in the Solution Explorer and then click ‘Build’. On C:\%PATH%\VB Projects\WIP\RU\RUScanner\bin\Debug there is now a file located, with the name DbProf.exe. When I run this file there are some errors visible.

According to tot the first error, I placed config.xml in the Debug folder and called DbProf.exe. Result: an empty line. Ok, the errors are gone, but no decrypted password.

The script needs some modification. When I read this script carefully there is an encryption and decryption section in the Utils.vb file. When I run the DBProf.exe the Module1 will be called and executed. This module is placed in the file Module1.vb. As this module contains no entries for decrypting the password, there is nothing happen. To get the decryption done, I need to pass the encrypted hash to this module and read the decrypted password. So, I ended up with two lines of code to get the decryption to do his thing:

I added these two lines of code:

The file Module1.vb after the modification:

Now, I can call this file again from the Command Line:

With the password of the user c.smith I can create an SMB session. I invoked this command:

Go to the user.txt and download this file to my machine.

By opening this file I can read the user flag.

I can now do more enumeration with the user c.smith. There are interesting files on his home drive \C.Smith\HQK Reporting. I downloaded the files to my machine.

It seems that the file Debug Mode Password.txt is empty. Another empty file… Let’s start with this file, there has to be some content in this file, since it was not easy to get so far in this challenge. And for this one, is switched (again?) to my Windows machine. (Sorry guys, I’m a Windows Engineer…).

PowerShell is a Powerful tool in Windows. It can also be used to extract hidden data streams. From my Windows machine, I have created a Network Connection to the home folder of c.smith and invoked the commands below to get the contents of this file: 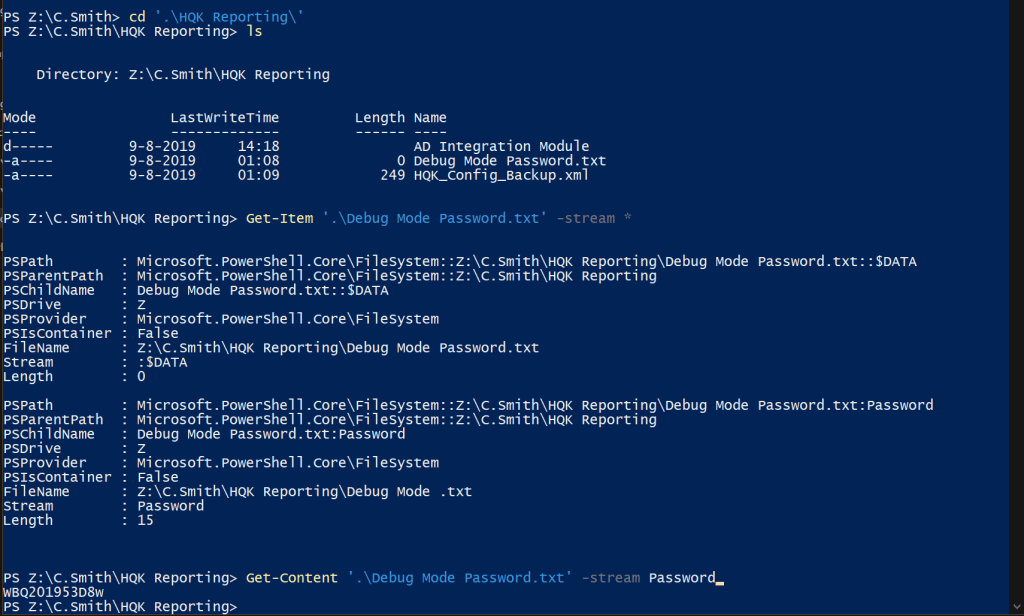 I have now more commands at my disposal:

I need to poke around and try to find something interesting. In the directory LDAP, there is a file named ldap.conf with the contents:

Another encrypted password… I have copied the contents of this file to my machine. I need to put all of the pieces together starting with the file HqkLdap.exe. To know what this file is doing, I need to compile it.

To decompile this program I use dotPeek from JetBrains. I have downloaded this program from their website: https://www.jetbrains.com/decompiler/. I loaded this program into the software. The code got compiled by the software to C# code. After reading through the code, the class CR is interesting because in this part the password gets decrypted. I got an encrypted password from the Administrator account which needs to be decrypted, sounds logical anyway.

This part public static string DS(string EncryptedString) is calling for the encrypted string for decryption.

In my Visual Studio, I created a new CSharp project with the name decrypt_admin.cs and copied the contents of the CR class to this project. I ended up editing this file and added some lines which are calling this DS function with the encrypted password as a string.

The last thing that I have to do now is to run the code and get the password decrypted. I decrypted the password with Fiddle.NET (https://dotnetfiddle.net/).

A Sniper must not be susceptible to emotions such as anxiety and remorse. Craig Roberts About {{page.machine}} In this post, I’m writing a write-up for the machine {{page.machine}} from Ha...

Technology is just a tool. In terms of getting the kids working together and motivating them, the teacher is the most important. Bill Gates About {{page.machine}} Recon Port scan with...

It doesn’t matter how many times you get knocked down. All that matters is you get up one more time than you were knocked down. Roy T. Bennett About {{page.machine}} In this post, I’m writ...